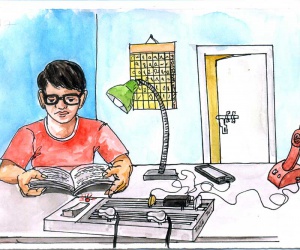 M.Tenith Adithyaa, a 15-year-old student who already has 17 inventions under his name that have bagged him many awards and two Guinness World Record attempts. Adithyaa needed many electricity plug points to run various devices at the same time while experimenting. Using many extension cords/power strips was cumbersome, hence he developed an adjustable electricity extension board, in which one can put any type of electric plugs wherever space is available. The device is effective up to a distance of 3 meters, and the model is ready for commercialization.