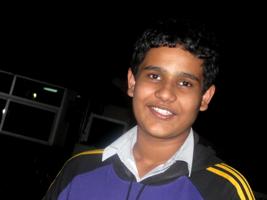 A cycle rickshaw with extra pedals for passengers who may wish to help by co-pedaling the rickshaw.

Inspiration behind the Idea

Arnab recently moved to Kolkata.  He was surprised by the number of cycle-rickshaws on the road.  “In Kolkata, anyone who is unemployed ends up becoming a rickshaw puller.  They are weak and frail, but still do this difficult work to earn money.  So I thought of a way to reduce their burden,” he shares.

How Does it Work ?

The pedals are placed just below the passenger seat and connected to the back-wheel.  The rickshaw puller retains control over the brakes so that safety is not compromised.  A simple lever is attached to make this system optional.  So, when the pedals are not in use, they work as a comfortable leg rest.

Arnab believes that his idea can also be implemented in the hand-pulled rickshaws found in Kolkata, although it will need to be changed considerably because these rickshaws do not have a gear system.

Arnab has represented his school in many quizzes and debates, and is a state-level winner in math and science Olympiads and the National Level Science Talent Search Examination (NSTSE).

His mother shares an interesting anecdote of Arnab’s flair for mathematics even as a child.  She says, “This happened when he was very young, around three years old. We saw him adding double digits by himself.  Surprised, we checked with the teacher who said that it had not been taught in class.  We later realized it was something he just picked up on his own.”

Although good at academics, he is an outdoor person who loves trekking, shooting and playing. He admits that he “can only sit down to study only after playing for at least a couple of hours.”  He has also recently started learning how to play the guitar and enjoys listening to rock music. He likes mystery novels, especially the Sherlock Holmes series and has been inspired enough to pen down a few mystery short stories himself.  He also enjoys writing poetry on diverse topics.

His father is in the Indian Army and exposure to different places and people has helped broaden his horizons.

Currently in class 12th, Arnab wants to study in IIT and later, do research in astrophysics as he was always “intrigued by space as a child and wants to know more about it.”

When his mother is asked what her dreams are for her son, she candidly replies, “Today parents have so many dreams for their children.  But I feel that I cannot impose my thoughts on him.  It is for him alone to decide what he wants to do, and I believe that this is the right way.”

A poem by Arnab

Success is the destination, Achieved by hard work and determination.
But to succeed, you need to strive,
Innovation keeps new thoughts and ideas alive.

Innovation acts like a catalyst in a chemical reaction,
Making the journey less arduous and filled with fun.
Since time immemorial has man been innovating,
Driven by his need to counter life’s painful sting.

The recognition lies in the fact that,
The nation has benefitted from your act.
The pride and honour is no doubt increased exponentially,
When this recognition comes as an honour bestowed on me.

Who better than an icon, an inspiration,
Who motivated and inspired the entire nation.
The “missile man” who shaped the country’s destiny,
I pray to the lord to grant me the strength and dedication,
To serve like him and be of use to humanity.

Spray on Gloves and Socks
Artificial Assistance for the visually challenged