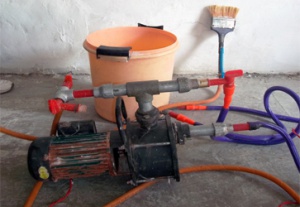 Jahangir (19), a young student, from Anantnag has developed an electric painting brush, which is an automatic gadget for painting walls without having the need to dip the brush in the paint bucket.

Jahangir’s father is  a carpenter while his mother is a house wife. His two younger siblings are students. He has been a brilliant student since childhood, known among his friends for his hard work and practical bent of mind. Jahangir, an eager fellow, is always on the lookout for different kinds of problems, which could challenge him. Many times his friends also approach him for solutions to their problems. Some even believe that being so sharp, he does not need a formal education. A sort of non-conformist, he is never ready to believe what does not appeal to his mind, even some accepted theories of science. He mentions that such theories can never be final; they need to evolve with the increase in scientific knowledge and should be evaluated accordingly.

His father mentions that he has been a good and patient observer and that they have always provided him full support and freedom. Though not being sound financially has prevented them from allowing him to spend on his ideas most of the times. But the family still remains a great pillar of strength and has provided emotional support. Finances have been managed frugally from here and there somehow! Reflecting on his poor financial conditions, Jahagir quotes Wali Dakhni, a famous Urdu poet of the 18th century, “Muflisi sub bahaar khoti hai,  Mard ka aitibaar khoti hai” (Poverty snatches away every moment of spring. It snatches away the trust of man.)

Besides studies, Jahangir also has interest in painting and poetry, mostly in Urdu and English.  He has a good collection of poetry written by himself, which he doesn’t want to show any one until it gets published. He also has written an autobiography of himself as he believes an autobiography helps a man to alienate himself and enables him to look at one’s self objectively. He also has a good collection of self made toys. He has even carved Isaac Newton’s statue out of wood and has painted portraits of many great scientists like Galileo Galilei, Stephen Hawking, and Einstein.

While painting one needs to dip the brush into the paint bucket from time to time. This makes the process tedious and cumbersome. Some paint also gets wasted as well as spillover. In order to support the family financially and also partly fund his own work, Jahangir used to work while also studying.  One day he noticed some workers painting a high wall of a house near his home. There was little space to keep the paint bucket and the workers were struggling to hold on tight to the ladder, dip the brush in the bucket periodically and paint the wall properly. Paint had also splashed over their clothes and body. He sympathized with the workers and started to think what he could do to reduce their effort. He thus got the idea of making the electric painting brush.

Jahangir’s innovation is an automatic painting device facilitating the user to control the flow of the paint through the brush.

The electric painting system consists of a pump operated by one hp motor, which pumps the paint into the brush through tubes, a specially designed brush with a distributer to spread the paint properly in the bristles, paint bucket with inlet & outlet connected to the pump and an operator belt which is worn by the user while painting.

The paint from the bucket flows into the pump, which pushes it up to the brush, through the flexible pipes. An actuating lever has been provided to start/stop the flow of the paint into the bristles. The paint comes out at the base of the bristles at four places via the distributer. Jahangir has developed a working prototype with the financial support from NIF through GIAN Cell-JK, University of Kashmir and technical support from USIC, University of Kashmir. Prior art search did not disclose any similar product in the market. NIF filed a patent (1949/DEL/2011) in the name of Jahangir. This brush has the potential for wide application and has good commercial potential.

Other than the electric painting brush, Jahangir has developed other innovations as well, which are described briefly. Electric tester to check the flow of current over an insulated wire itself without cutting the insulation, pedal sewing machine for physically challenged, which has a pedal attached to a wheel, a dish washing machine, a mason helper, vapor releasing fan, which is a light weight mobile cooling device and a wind power generator among many others.

Presently, Jahangir is keeping himself busy in studying celestial theories and has written about them and submitted to different universities including the University of Kashmir. His dream is to establish a scientific lab after working with reputed organizations like the Royal Society, NASA, and BARC etc. He is hoping for a meaningful future and has this to share

“boo chus yachchan bunyadi kathaou nishe zainyab gazun. mei pazi tei karun yami khatra raban ba paida karus”
(I am interested in fundamental research. I should do what nature has sent me for)