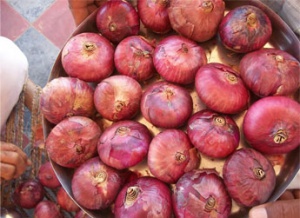 Balwan Singh (50) is an innovative and progressive farmer from Bhiwani, Haryana. He has developed a high yield improved variety of onion with good keeping quality.

Born in a family of farmers, Balwan Singh was a naughty child and was fond of playing “kabaddi” and “pilla khudra”, a local game similar to hockey. Though his parents wanted him to lend a helping hand in their work rather than going to the school, little Balwan had certain inclination towards studies. He used to run away frequently to the village school, to be with his favourite teacher Bhim Singh. His simplicity and the ease with which taught appealed to Balwan most. Science was his favourite subject but somehow due to precarious financial conditions, he could not continue his studies beyond class ten. His parents also wished for him to help them in their chores.

Soon after, he landed up a job in Jindal Steels but did not continue beyond a few months. He also got selected in the Police and Army, but as luck would have it, never joined them to remain an agriculturist. Left with only an acre of land after the partition of the family property, Balwan rented fields to cultivate and occasionally worked as farm labourer too. Picking up bits and pieces from every where he worked, his interest in farming kept on growing. Research on different plant varieties and its analysis is something, which he really enjoys. An advocate for organic farming, he has developed a mixture of neem leaves & fruits, cow dung, cow urine to spray in his fields. He maintains that weeding and irrigation are two very important activities for plants’ growth. Water being scarce, he irrigates alternate rows. “Water table is at 60 ft depth in the region and the water is salty which increases the ph. Hence, irrigation is mostly done through canal irrigation and only after sunset” informs Balwan. Apart from agriculture, he has another very interesting preoccupation, genealogy and tracing of family history. He claims to have traced back his family history by over 200 years.

A mismatch between the quality of seeds supplied by different companies and the expectations of the farmers, let Balwan to think about developing some variety of his own. After a careful look at the market, he found onion crop to be the most suitable for his experiments.

Sometime around 1984, his brother bought some onions from a neighbouring village. Balwan observed large and well shaped bulb, red colour, thick and tight skinned characters in these onions. Being an experienced farmer, he knew that good quality plants yield good fruits hence he started grading and breeding through selection considering parameters such as the health of the plant, tight skin, large size and well shaped red coloured bulb. Year after year, he repeated the same process to purify the variety and stabilise the characters. After the painstaking efforts of seventeen years, finally he was able to stabilize the characters of his onion variety.  It took him long but he persevered with the support of his family. The family also maintained the year wise performance data for the crop, which exhibited good performance. All this while, he was ably supported by his wife who many times had to take care of both the field and household all by herself, when Balwan used to travel in connection with work. She always stood by his side in his failures in experiments and episodes of sickness or depressions.

This Onion variety is a high yielding variety with very good keeping quality due to its tightly attached skin.

Its yield is about 350 q/ha and good thickness of rings, tolerance to stemphylium blight and moderate pungency are the other features, which have been noticed. Its dark red coloured globular shaped bulb about 5 cm diameter, neck thickness of 0.8 cm and 50-60 g weight appears more attractive than the conventional ones with firm, bright red coloured, mild pungent bulb with average yield 200 (q/ha).

NIF facilitated that the testing of variety at Vegetable Research Farm, Department of Vegetable Science in CCS HAU Hisar, Haryana during Rabi season, 2010-11. As per the results, the onion variety showed significantly higher yield (368.1 q/ha) of bulb, average bulb weight and bulb diameter than the check variety Hisar-2. Other features, which distinguish this variety, are dark red colour of bulb dry skin and dark green colour of foliage.

Though Balwan Singh has small land holding, and limited access to new technologies, he has been able to develop a variety whose performance is high as compared to other farmers’ varieties. He has distributed the seed of his variety to about a thousand farmers of Haryana and around. Balwan Pyaj is well known in Hisar, Bhiwani and adjoining areas.

Balwan Singh, due to his pleasing disposition and the experimental streak enjoys a very respectful place in the village, community and local administration. He specially recognises the support of the officials of the Haryana Agriculture University who guided him from time to time and helped him with technological updates. NIF also provided him an opportunity to display his variety at the Innovations’ Exhibition at the President House in 2011. He has been participating in different agricultural exhibitions of agricultural products and winning prizes as well. His work has been covered in local as well as national media. Being a generous person, he does not mind sharing his knowledge and seeds with others for prosperity.

“Mere bijon se gar ho kisi ka bhala, to fir kyu rahe mujhko koi gila”
(If some gets benefitted by my seeds, why should I complain?)