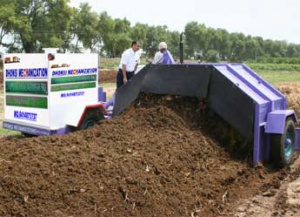 His father wanted him to study but somehow, he was interested in becoming a mechanic. His father, thus showed him different workshops in the nearby town, but he was not satisfied. Somehow he kept on insisting that he wanted to see a ‘workshop’. His notion of workshop, a word he heard from his uncle a few times, at that age was a place with lot of machines and repair work going on. He was surprised to see all kinds of small and big mechanic shops like scooter repairing, watch repairing, welding etc., being called as ‘workshop’. He refused to work at any of these places and selected a tractor repairing workshop to start his learning at the young age of 13. His father told a tea shop nearby to give him tea and snacks whenever he wanted. Slowly he learned the work and started impressing his employer with his ingenuity. Much later, he was joined by his father as well and both worked there for the several years. Thereafter, they set up their own fabrication workshop at Sri Karanpur and continued working there till 1984 before they shifted to their present place, Ganganagar.

His tryst with innovation started in the year 1972 when he was able to repair the genset of a military vehicle, which broke down while passing through his village. He proudly recalls that he did not charge for the same as he has great admiration for the jawans. Later, he also repaired a German tractor, lying useless, by modifying and using parts of local Kirloskar engine. Not satisfied with his daily routine of repairing, he kept himself engaged in creative pursuits. In 1976, he modified a petrol bike to make it run on kerosene. He converted the engine into a petrol start kerosene run engine. He recalls having modified about 30 such bikes then, which gave an average of 80 km/l.

Sri Ganganagar district is situated at the point where the Satluj River enters Rajasthan. Known as the ‘food basket of Rajasthan ’, the district also boasts of many cotton ginning and pressing factories, mustard oil and sugar mills, and spinning and textile factories. The district is also one of the largest automobile markets in India. He often used to get threshers and harvesters for repairing. Many times farmers shared their other technical problems as well with him. Sometime around 1984-86, while working on threshers, he was able to modify the then prevalent design suitable for wheat and similar crops, to suit mustard crop as well. This he achieved by developing a reduction gear for reducing the speed of threshing drum and by adding a blower/aspirator fan. He then modified a combine harvester originally suitable for wheat and paddy to suit mustard crop, a task given to him as a challenge. Changing the settings of the combine and retrofitting a small kit to make the combine suitable for mustard, Gurmail could modify any combine harvester. He continued this work till 1997 but his technique got copied gradually, lost interest and moved over to other things. Continuing his work, he developed a mini combine (1990) for harvesting and threshing wheat, soybean, mustard, paddy, etc., costing a mere Rs. 70,000. Though he sold many units of the machine and earned well but could not save much due to his habit of reinvestment in his own research and development.

Sometime in 1998-99, he got into an agreement with a company in Punjab to develop a thresher cum straw windrower. He was assured of a 50 per cent margin and his name on the machine. However, he got cheated and could receive the royalty for only three machines though the company continued with the production. Undeterred, he continued and churned up improved agricultural products one after another. In 2000, he modified a thresher to make it safe in feeding the crop, reducing the load on tractor and facilitating storage of grains as well. The machine also had the provision of re-feeding the un-threshed crops and blowing out the husk. He sold about hundred of these modified threshers during 2000 to 2008 when the margin got reduced. He then also developed a hydraulic powered grabber to pick the heavy stones, wooden blocks, sugarcane loader, chaff cutter, hole digger, wood chipper and many such useful devices.

Gurmail Singh mentions that all the drawings originate in his mind clearly, which he reproduces on paper. Thereafter the task of converting those ideas on paper into reality starts. Passionate about his work, he claims to have spent over Rs twenty two lakhs over the last few years in research and development. Many times his source of funds was open market from where he took money on interest. But thankfully due to his adeptness, he could develop and market his machines properly and was thus able to settle all the outstanding balance. Apart from his workshop where he likes to spend most of his time, Gurmail Singh also owns some irrigated agricultural land in his native village where cotton, millet, wheat, guwar etc., is cultivated. This is taken care of by his brothers.

His family includes his wife Ranjeet Kaur, two married sons and three grand children. Both his sons, Palvinder and Guruvinder dropped out of school to help in his workshop. His wife, while taking the responsibility of the entire family, allows him sufficient space to work on his new ideas and machines.

An idea from an earthworm

In October 2006, a farm owner from Firozpur, Surendra Kumar Jakhad invited him to show vermicompost being made from cattle dung. Jakhad wanted a machine to convert waste fruits of his farm into compost. Dhonsi was given 15 days to work upon. He returned back and started studying the vermicompost process himself. He observed the earthworms breaking down the waste by eating and excreting. He thought of developing a machine to simulate the work done by the earthworms. Working day and night for three months (January 2007), he finally came up with a machine, which could process about 1-1/15 ton or waste per day, at the cost of about Rs 1,60, 000. Happy with Dhonsi’s work, Surendra Jakhad honoured him and sent a video CD recommending his machine to a company Axle Crop Care Ltd, which later purchased six machines.

The innovation is a tractor driven machine, consisting a rotor shaft at which number of straight blades made of carbon steel are fixed to cut and thoroughly mix the bio-wastes while adding moisture as well.

In this machine, Gurmail Singh has mechanized the process of turning the compost. The machine can be attached to any make and model of tractor of size 50 hp or above. The rotor, which is 16” in diameter, is nine feet long. Its 9”blades are helpful for breaking, chopping into small pieces, mixing and lining the biomass. A hydraulic jack has been provided to facilitate the up and down movement of the rotor. At the side of the tractor, a water tank with 1500 litre capacity has been provided. This water is used to moisten the compost while the rotor blades are turning the heap of biomass. A weight box has been provided next to the water tank to maintain balance during movement.

While the rotor rotates and the blades cut the biomass, moisture is also added to the mixture. To cover the entire heap of biomass, the tractor is slowly moved from one end of the heap to the other. This operation is repeated four to five times at an interval of about five days in summer and interval of seven days in winter. As a result the total time for converting biomass into manure reduces to 25 -40 days, as against 120-150 days using conventional methods. The machine can cover a row of wastes disbursed by 100 trailers of size 11 ft x 6.5 ft x 2.5 ft (i.e. about 400 ton) in one hour consuming fuel  about 3.5-4.0 litre per hour.

The technologies for thoroughly mixing compost for rapid composting mechanically are available abroad, although no such domestic product is available. Moreover, the provision of providing moisture while turning biomass does not appear in art and accordingly, a patent (1717/ DEL/2008) for this machine was filed by NIF in the name of the Gurmail Singh.

The compost has been tested by soil testing laboratory, ARS Durgapura, Jaipur. The percentage of N, P, and K was found to be 1.87, 1.79, 2.26% respectively as compared to 0.4-1.5, 0.3-0.9, 03.-1.9 % respectively, in the conventional farm yard manure. This compost was found to be even better than vermicompost (N, P, K at 1.6, 0.7, 0.8%). Similar results have also been reported by Chambal Fertilizers & Chemicals Ltd. The user feedback is also in favour of its cost effectiveness and ease of operation. A few buyers have mentioned that the aerator has provided them option to add sugarcane waste, using which was not possible in the traditional method.

Costing over Rs 3, 00,000 this machine is claimed to have low operational cost at about only Rs 0.45 per ton. For commercialization of this machine, Dhonsi was supported under the Micro Venture Innovation Fund scheme of NIF. He has been to sell about 25-30 pieces in Maharashtra, Uttar Pradesh, Gujarat, Rajasthan, Punjab and Haryana. Of these, five machines have been sold after NIF mobilized the support.