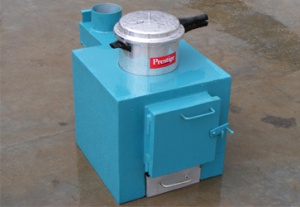 C Senthil Kumar (45) is the owner of Kumar Industries specializing in making wood fuel based stoves and heaters. He has developed cooking stoves whose walls have been insulated by brick made from special clay, which reduces heat loss. This stove has been well accepted by the users.

Senthil’s father started an agriculture equipment making unit in 1969. Seeing different kinds of agricultural implements being made around him since childhood, his could never focus properly in studies. Discontinuing his studies after class 12, he joined his father’s business with the aim to provide farmers the best qualities of equipments. In 2000 he started his second unit, Kumar industries, which manufactured non–electric fire wood heaters and kitchen equipments.
He stays with his wife and daughter. His wife is quite supportive of him and in his absence, handles the business as well.

He first made the brick insulated stove in 2000 and subsequently developed many versions of it for both domestic and industrial use. He claims to have sold over 5000 pieces of the different variants till date primarily in Tamil Nadu state. Wood stoves are available in art but they don’t have insulation bricks between the walls. It has grills for better aeration and thus resulting better combustion. Users have also given feedback that the running cost is less as compared to other conventional stoves. He also claims that in this stove any kind of waste wood can be used as a fuel. Senthil wishes to now export his product as people from other countries have been showing interest in these stoves. He plans to launch the stove in an agri fare in Sri-Lanka soon. However, he says that first he would supply as much as needed by his countrymen and then gradually expand to foreign shores.