Delivery Period : 10-15 day after confirmed order with 75 per cent of the price as advance payment 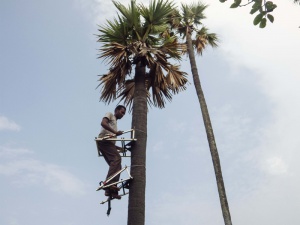 Renganathan alias D.N. Venkat (49), an agriculturist from Coimbatore, Tamil Nadu has developed a coconut tree climber with a sitting arrangement, locking system and a safety belt. 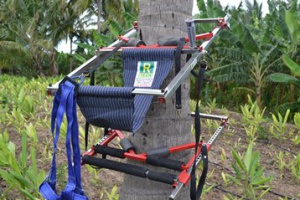 After trying his hand at many things, from being a daily wager in a khadi spinning unit, selling spare parts of pumps, to being a mechanic, Venkat finally settled down with agriculture. It was here that he noticed the problems in climbing coconut/palm trees. He planned to address all the issues and design a simple low cost tree climber. Working hard over a period of a year and making about three progressively improved prototypes; finally in 2008 he was able to fabricate a model to his satisfaction. 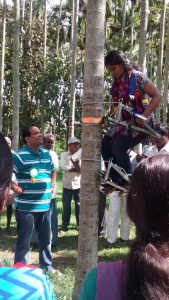 The tree climber has a seating provision and has two frames. The upper frame is operated by hand while the lower one is operated by leg. The user sits comfortably on the seat and by the up and down movement of upper and lower frame, can climb the tree. A locking system has been provided, which enables the climber to work without fear at any height. To avoid the possibility of a fall, a four lock pin can be fixed at any height. One can climb up to 40 ft in 5 minutes (this includes time needed in fixing, climbing up- down and removal of device from tree). One of the major advantages of this machine is that it is useful for trees with different girth. University of Agricultural Sciences, GVK, Bangalore has tested the device as part of an all India coordinated research project on Post Harvest Technology and found it useful for climbing coconut palms. The team also gave a special mention of its in-built safety feature.

Prior art has discloses similar devices used by hunters but about the girth of the trees on which these can be used is unclear. Having a good demand majorly in South India, Venkat is selling the device at Rs. 7000/-. So far he has sold about 200 units in Tamil Nadu. Recently few units were exported to other South Asian countries as well.