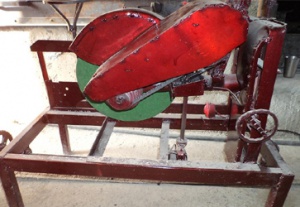 Abdul Rahman Sheikh, 50, a mechanic, has developed an iron cutter capable of performing four kinds of motions and cutting iron precisely from different angles. Its cutting range varies between one inch to eight inch (pipe, guarder etc) and it can cut flat sheets of any length.

Son of a bricklayer, Abdul Rahman Sheikh has studied up to class 8th and owns an automobile repair workshop. He has four sons and two daughters in his family. Two of his sons work with him in the workshop while others keep themselves engaged in other sundry activities.

Sheikh has been quite a creative person since his childhood. He liked making and displaying toys of iron and tin, and displaying them. Once, in a convention at Dooru, the then Chief Minister of J&K saw his toys. Impressed with his creativity and technical skills, he offered him the option to undergo any technical training.  Rahman Sheikh, thus, enrolled himself for the plumber training for a year at Bagh –e- Dilawar Khan. He got excellent grades in the course and got posted in the Transport Department. But the engagement was quiet brief and he had to return to his family due to certain problems. Subsequently, he set up this present workshop with the help of his brother. He started making grill gates, different iron structures for household use along with the motor repairing work, learning everything through sheer hard work. For setting up the workshop, a bank employee also helped him obtain the loan. The workshop provided apprenticeship to his brother as well as his two sons who now assist him aptly. It is not surprising that he named his workshop as ‘Shahbaaz Steel Hard Works’, a name which intrigued the shodhyatris and drew them into his workshop.

With time and improvement in the quality of work, his reputation increased and also increased his work load. Getting labour at reasonable rates was getting very difficult for him but the work also had to be finished on time. He pondered over the problem and came to the conclusion that if he had a machine, which could reduce dependence on labour, his problem would be solved.

Once he started making the machine, he knew what he wanted to make and how, so there was no technical problem in developing the machine. However, finances were limited and sourcing money for components and items he did not have was difficult for him. The machine thus took some time in developing. Many a times, he had to say no to his children for some things they desired. But his family was (and still is, as Sheikh points out) very understanding and took his refusal in stride. They were always there to provide him emotional and moral support. His wife’s contribution is foremost as she discussed with him the problems and gave suggestions to the best of her knowledge and experience. He fondly recalls an incident that once when his iron cutter was being photographed, he joked with his wife that tomorrow the iron cutter would be displayed somewhere and he would be invited there. Then he would get married there itself. To this his wife just smiled and said that she would be with him wherever he may be. She died soon after said Rahman with watery eyes.

Rahman’s iron is a useful cutter, which can incisively cut iron multi-directionally. Iron materials such as pipe, rods, sheet etc can be cut with his iron cutter.

Needing just a person to operate, four kinds of motion can be obtained from this cutter viz. forward and backward, up and down, right and left, and for cutting at an angle the cutter can be rotated on its vertical axis. The cutting range varies from one inch to eight inch; flat sheets of iron of any length can be cut using this cutter. This iron cutter is similar to angle cutting band sawing machine. Hacksaw has been replaced by toothed cutter and can rotate about its vertical axis, which is perpendicular to the plane of the ground.

Prior art search discloses different types of iron cutters using hacksaw blade. The present iron cutter can cut in any angle from 0 to 180 degree while the available cutters can cut only from 0 to 45, 0 to 60 and 0 to 90 degree. Though NIF is processing the patent filing application of the cutter, Rahman Sheikh has no objection in declaring this open source or anybody else adding value to it but with due acknowledgement. NIF has also engaged an Ahmedabad based design firm to improve the cutter. Besides the iron cutter, Sheikh has also made a grass burning machine on a request from one of his acquaintance.

Rahman Sheikh feels that in the mindscape of people, Kashmir is not imagined to be a place rich in technology or innovation, which is not true in totality. He feels that a change in the education system is imperative so that marks should not only define the ability of a child.  There could be many other things, a child may be good at. Teachers should also inculcate the spirit of originality among children. Such children who come up with something new and useful may be provided possible financial, technical and psychological support. Sheikh is willing to train any child in his workshop who sincerely desires to learn something. He adds that sometimes, weakness in academics may be ignored in favour of creativity and innovation.

(our system should be such that it allows a child to build upon his inherent strengths, their innovative inclination should be respected and promoted)