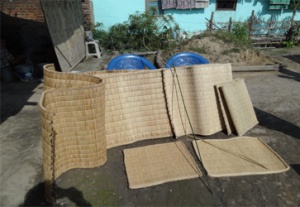 Yenkhom Mangi Singh, from Kakching, Thoubal District of Manipur pioneered Kakching mat weaving machine which is the first of its kind in India.  The innovation is a small weaving machine for making the mats of water reed locally known as Kouna in Manipur. The Machine works like a shuttle loom. The leg treadle in shuttle loom is replaced by a hand lever which lifts the warp threads. The machine increases the productivity 3-4 times in comparison to the conventional weaving process.

Life has been a struggle for Mangi Singh since childhood. He had to discontinue studies after class 3, since he was affected by polio.  His wife Mypakpi (52) is illiterate. He has three sons, the elder son has studied upto X Standard, second upto IX Standard. Mangi Singh’s youngest son is differently abled. Other than Mangi Singh, his second son also supports the family; he is a hawker.

Mangi Singh, though not formally educated is very well skilled in the Manipur language. Being specialized in Manipuri, he is a well known tutor for Manipuri language in the area. He gives tuitions to the school students in his neighbourhood for Manipuri subject. His students show extra ordinary performance. His daily routine starts with the early morning tuition for the small kids and after that he starts mat weaving.  In between he does other small works as and when he gets the demand. He manages to earn about Rs 3000 by way of tuitions and Kouna mat making. Mangi does a wide variety of jobs to earn a living. Because of his interest in learning new things, he was able to attain mastery in a wide variety of jobs. Apart from being a craftsman by profession, his other face includes that of an electrician (mechanic) cycle repairer, barber and blacksmith.

The only driving force has been his inquisitive mind and will to fight and this helped him so far for learning and solving many local problems while earning for livelihood. If there is a person who is equally hardworking and struggling to survive in the locality, that will be only Mangi. He is a brave man! “Bring any kind of problem I will give solution for that” claims Mangi Singh proudly.