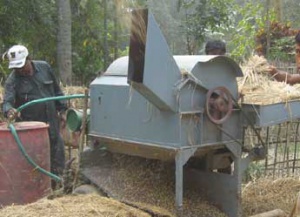 Based at Moriabari, Fazlul Hoque (50) is a mechanic who has developed a whole stalk paddy thresher capable of threshing moist crop as well.

Fazlul was born to a goldsmith father and though good in studies, could study only up to 7th standard due to his father’s ill health. After his death, he set up his cycle repair shop. Later over the years, he kept switching over from one kind of work to another trying his hands at shutter and grill work, making water filters, washing powder, gates, small agricultural machineries etc. Being the sole bread earner of his family comprising of his wife and six children, he had to face a lot of problems and financial constraints. In order to stay afloat, while he tried his hands at different kinds of tasks, he briefly engaged himself in the collection and sales of scraps. It was during this time that he got a chance to look into various machine’s interior mechanism.

Building upon the knowledge gained, he later started a fabrication unit where he started manufacturing small agro machineries along with spare machinery parts. Presently, he is exclusively manufacturing paddy threshers and has engaged eight people in the fabrication unit. His sons also lend a helping hand in his unit.

Moirabari, the native place of Fazlul is about 30 km away from the district head quarter Morigaon and about 150 km from Guwahati. It is a major rice producing district in Assam and located adjacent to Nagaon district, which is known as the rice bowl of Assam. An estimated 70 per cent of the households in the area are involved in agriculture with rice being one of the main crops. For threshing paddy, farmers here mainly depend on cattle even though it is time consuming and not very efficient. Threshers though available are beyond the reach of the most due to their cost. Few years back, Assam Government provided some manual paddy threshers to farmers in the region. These threshers had a lot of maintenance issues and needed regular upkeep, for which farmers visited Hoque’s workshop from time to time. While working on these threshers, he realized the problems associated with them and started thinking about making one such thresher himself, which was devoid of such issues. He identified the need to have low cost efficient threshers, which can be an alternative to manual threshing by hands or through cattle.
Fazlul purchased four such threshers in scrap and started his experiments. He carefully noted down the demerits in the existing machines and then began to think about ways to solve the technical issues. This was sometime in 2003-04. It took him another two years of hard work and persistence to come up with a satisfactorily working model in 2006-07. Fighting moments of doubts and periods of financial uncertainty, he prevailed to develop the thresher after undergoing a number of iterations of building and dismantling.

NIF Asom cell came to know about the thresher from a newspaper report and got in touch with Fazlul.

Fazlul’s thresher is a low cost motorized machine for threshing paddy without breaking the straw and capable of threshing moist crop as well.

The body of the machine is made of high quality steel to withstand maximum wear and tear. The feeding system is chute type and the power is transmitted from the prime mover to threshing cylinder though belt and pulleys. The machine runs on 5 Hp power and can be operated with an electric motor or diesel engine. The sieves in conventional threshers have been replaced by a blower to reduce costs. Paddy is fed from the rear and led to the threshing cylinder, where the spikes act upon each straw and separate the husk from the grain. Under the impact of the blower, the straws eject out through the outlet in front while grains heap up on the ground underneath the machine through a slot provided.

Though prior art search revealed different kinds of paddy threshers but attempts to obtain performance or efficiency data from manufacturers for benchmarking purpose did not yield any fruits. The thresher has been selling well and the users have appreciated its performance considering lower investment and running cost.

Advantages of the thresher

Needing just a person to operate, it can thresh paddy ten times faster than four draft animals. It can also be used to thresh moist crop. Another feature of the thresher is that it retains the complete straw and does not chop it. This straw can then be used as gap filers in packaging and manufacturing of earthen houses etc. The paddy thresher is easily reparable and can be used for both commercial and domestic purposes.

NIF, which filed a patent (508/KOL/2011) in his name, also supported him under the Micro Venture Scheme for commercialization of his thresher. The support to Hoque was facilitated through NIF Asom cell. Fazlul Hoque has been able to sell more than 75 units in different districts of Assam and West Bengal.  This innovation has enabled him to improve his financial status. One of his machines was purchased by another innovator Biren Singh in Bishnupur, Manipur. To suit his own requirement, Biren has done some incremental changes to the thresher like putting wheels for easy transportation, incorporation of additional fans to blow away the husk and other minor changes.

Presently, Fazlul is preoccupied with his orders for threshers and has little time to think beyond. He has certain other ideas as well but is waiting to consolidate his growth before undertaking anything else forward. He believes in engaging one’s mind constructively and gives the following advise to everyone to follow in life.