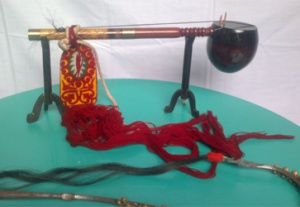 Jilatombi Singh, Kennedy Singh and Bhagat Singh, three music lovers from Imphal have improvised the traditional instrument “pena” into pennao by changing the number of bundle strings and modifying the bridge arrangement. This arrangement allows the Pennao to play a wide range of musical notes, without losing the original and distinctive sound of the traditional Pena.

Jilatombi Singh (55) is a craftsman, singer and a musician; Bhagat Singh (34) is a musician cum theatre artist while Kennedy Singh (45) is a small contractor. The common factor that keeps all of them together is their dedication to music. The three friends have a common vision to establish a Pena Music School at Imphal. Pena is one of the most popular musical instruments of the Meitei community and is used in a variety of social and cultural events. The uniqueness of Pena lies in its distinctive sound, which is quite different from any other fiddle and string instruments. Jilathombi, Kennedy and Bhagat have worked together to improve the pena to enable it to play classic and modern music also. “Nao” in Manipuri means small and they gave the name “pennao” as an offshoot of pena, which originally was a single string instrument with the vibration coming from the belly. To increase the range, they tried to introduce two to three strings. Cow’s hide/cow’s skin was used to make the belly of pena and to keep the identity of the sound, they kept the skin same as before. Pennao, the modernized version of “Pena” has three strings and can produce lower octave, middle octave and upper octave. It can be used as a folk musical instrument, classic and modern musical instrument. Further it can also be used in the orchestral music as violin and it can also be mentioned that it can be easily tuned to required scale by using new technology. Pennao is also an advantage for a modern or classical soloist in exploring talents and skills through it.

Dhiraj Yumnum, Director of the “Department of Commerce and Industries”, Government of Manipur, who launched the pennao formally, mentions the instrument has great commercial potential across the country and abroad as well. NIF has filed patent ((Pat app no 1332/KOL/2011) in the name of innovators.