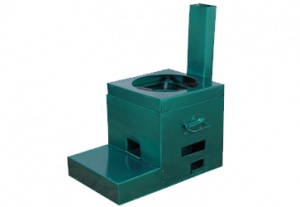 Jayaprakash (42), a chulha maker from Kerala has improvised the portable stove by incorporating a secondary combustion chamber for burning the un-burnt bio mass and hydrocarbons. As a result, the thermal efficiency of the stove has improved while the pollution has reduced.

Coming from a lower middle class background, V Jayaprakash was a very good student. Since his childhood, he had keen interest in science and innovations. He used to participate regularly in science exhibitions and represent his school. Some of his early projects included using pulley to lift load to a certain height and a small toy motor boat, which could go up to a certain distance and come back automatically.

His childhood was spent amidst a lot of constraints and he had to face a lot of financial problems. He recalls that one of the incentives to attend the school was the mid day meal scheme. Though he passed SSLC with a first class, he could not secure admission in intermediate in the science stream. Then due to high fees, he could not enrol in aeronautic diploma course as well. After passing class twelve, he went to his fathers’ work place in Coimbatore and started to earn his living as a daily wage labourer. The idea was to make some money and continue studies. However, he lost all his certificates in an unfortunate incident, which jeopardised his chances of securing an admission. A year later in 1989, he returned to his home town and started a small fruit business.

The chicken and the stove connection

While he was trying to settle in his new business, he heard about Kerala Shastra Sahitya Parishad (KSSP- a local forum for science literature and awareness) and the low cost smokeless chulha popularised by it. The term ‘smokeless’ somehow caught his fascination and he discovered a new interest. He got in touch with ANERT (Agency for Non Conventional Energy and Rural Technology- a Kerala government organisation working in the field of non conventional energy) to learn about the smokeless chulhas. With time, he got sufficient knowledge and confidence to switch over to the business of making chulhas.

Once he made a community chulha for a hospital and installed it at its premises. While inspecting it one day, he noticed a sudden spur of flame near the chimney after about 10 minutes of operation. He was surprised and reported the same to the experts from ANERT. They explained him that the observed flame was the result of the complete combustion of the carbon particles, which came in contact with oxygen near the top of the chimney.  This triggered his innovative mind and he started thinking of a stove model where burning can take place at two levels.  He tried over and over again for many months, making and breaking numerous stoves in the process trying different passages for air movement.

Persistence paid off finally. One fine morning, his attempts bore results and he became successful in burning the firewood at two levels with complete combustion and without smoke. He happened to attend a workshop organized by Kerala Shastra Sahitya Parishad who tested his stove and found its efficiency to be more than 30 per cent as against less than 20 per cent of the smokeless chulhas. He improved the model further and started selling the new product.

Jayprakash’s innovative stove is a double chambered efficient portable stove, used primarily for community cooking. It can use coconut shell or wood as a fuel.

This portable stove is made of bricks, cement, clay, cast iron and can cook food upto 100 kg. The base of the bottom chamber is made of iron grill on which the fuel is kept. Below the grill is an air chamber. When the fuel burns, smoke mixed with unburnt hydrocarbons reaches the upper chamber, which has been provided with air inlet holes. Complete combustion takes place here and the combined heat gets available to the cooking vessel above the second chamber. The fuel opening has been provided at the front of the device and can be regulated using shutter, which in turn controls the flow of air. The air which flows through the opening during combustion causes an updraft when the fuel is burnt. This triggers secondary combustion as the carbon particles, which were left unburned will now get burned due to the additional air.

Apart from its efficiency, lower cost and portability are also significant features of this stove. The combustion efficiency is in the range of 37.67% when wood is used as a fuel and 29.48% when coconut shell is used (Test report by Integrated Rural Technology Centre, Mandur, Palakkad). IIT Guwahati also tested the same and observed the thermal efficiency of 29.28%. ANERT team has informed that Hotel in Calicut, using this stove, needs only 75 coconut shells costing about Rs. 30 for cooking 40 kg rice. This is in contrast to LPG operated system, which needs 10 kg fuel costing about Rs. 400 for cooking the rice of same quantity. Considering the efficiency, cost effectiveness, portability and unique design, NIF applied patent (1582/CHE/2011) for this portable wooden stove in the innovator’s name.

Nif supported the innovator under the Micro Venture Innovation Fund for the commercialisation of the stove. Jayaprakash has sold over hundred stoves in the last two years and has been getting a lot of orders from colleges, hospitals, and municipalities. He has orders for over 500 stoves pending with him presently. In order to scale up his business, he wants to set up a production unit and is also looking for entrepreneurs interested to licence the technology so that he can spend more time in research and development. User feedback is of much importance to him as he believes that consumers can provide valuable advices for the innovators. He informed that many of his women customers have given him important insights from their experience of using this stove. One of them even asked him to make a two burner version.

Besides the portable wooden stove, he also manufactures and sells smokeless and community chulhas. License and certificate for the same has been issued from ANERT. He has sold more than 4000 smokeless chulha and around 700 community chulha’s.

Apart from his business, he also goes to community gatherings and shares his experiences with other people as well. In 2009, he demonstrated the design development and evaluation of improved biomass stove and its community use in Rural Innovators Meet organized by Kerala State Council for Science Technology and Environment (KSCSTE) at Thiruvanathapuram, Kerala. He also received Kerala State Energy Conservation Award 2008 in appreciation of the commendable achievements towards energy conservation and management. NIF invited him at the Innovations Exhibition at the President House in March 2011, which he considers as the most memorable day of his life.